So, she traveled the state selling yellow buttons that read: “I’m a Florida S.O.B. Ask Me Why.” That’s “S.O.B.” as in “Special Olympics Booster.” 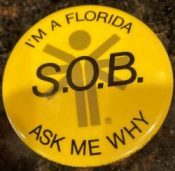 Grigsby was part of a group that began working to create Special Olympics Florida in 1970. She was there at its founding in 1972 and served on its board until 1989. From 1975 to 1979, she was board president.

A creative and relentless volunteer fundraiser, she traveled the state persuading business leaders, civic groups, and lawmakers to support Special Olympics Florida. It was Grigsby, a Special Olympics Florida Hall of Famer, who convinced Publix executives to launch the company’s annual fundraising campaign with Procter & Gamble.

“I made a lot of phone calls, and did a lot of speaking,” she said. “At least I apparently said the right things.”

Grigsby, a former teacher, committed herself to Special Olympics to help create new opportunities for people with intellectual disabilities. In the 1970s, many were still being warehoused in centers around the state. Grigsby knew they were capable of much more and just needed a chance to prove that.

“We had to show people what these individuals could do if given the opportunity,” she said. “And fortunately, we found people who wanted to be part of that mission.”

Palm Beach County
I get to play all of these sports -- especially golf! A couple of years ago…
FULL STORY

As we mark 50 years of making the world a more inclusive place, we want to hear your Special Olympics Florida story. Tell us your story by sharing a favorite memory or let us know what our programs have meant to you or the impact they’ve made in your life.  TOGETHER WE CELEBRATE!